You just need [freeShipping] to get free shipping

From 10th February 2017, to celebrate the 80th anniversary of the Solomon R. Guggenheim Foundation, the exhibition “Visionaries: Creating a modern Guggenheim” will exhibit over 170 modern works from permanent collections belonging to the Solomon R. Guggenheim Museum in New York and the Peggy Guggenheim collection in Venice. Bringing together many of the most iconic works of the Foundation and masterpieces of lesser-known artists, this celebratory exhibition traces avant-garde innovations from the late 1800s to the mid-1900s, and the revolutionary initiatives of six pioneering patrons of the art world who brought some of the most significant artists of their time into prominence, making the Guggenheim Foundation a forward-looking institution. The “Visionaries” exhibition includes important works by artists the likes of Alexander Calder, Paul Cézanne, Marc Chagall, Wassily Kandinsky, Paul Klee, Fernand Léger, Piet Mondrian, Pablo Picasso, Jackson Pollock and Vincent van Gogh.

Set in the Rotunda, designed by Frank Lloyd Wright, and in the Thannhauser Gallery, on the second level of the Tower, the exhibition is proof of the museum’s outstanding support for modern art in a show that traces the viewpoint of the six collectors of the avant-garde who were involved with the Guggenheim Foundation in its first decades, donating some or all of their private collections to the institution.

Among these “visionaries” of art, the founder of the Solomon R. Guggenheim Museum stands out. With the support of his trusted advisor, German artist Hilla Rebay, he forwent the more convention kind of collecting to become a great advocate of “non-objective” art, an artistic trend that tends to favour abstract art, with a spiritual purpose, of which Wassily Kandinsky was the greatest exponent. The extraordinary patrimony of modern art of the Guggenheim, collected in the 1930s and 1940s during the economic crisis and the events of the Second World War, was the reason the foundation was established, 80 years ago in 1937, to promote art, artistic training and the public appreciation of art.

The initial collection of the Solomon R. Guggenheim Foundation subsequently added important acquisitions from people who shared the same pioneering spirit as Guggenheim, such as a group of refined Impressionist masterpieces, from the first School of Paris, donated by Justin K. Thannhauser; the eclectic Expressionist collection of Karl Nierendorf, an art dealer emigré from Germany; the rich heritage of paintings and sculptures of abstract and surrealist art of Peggy Guggenheim, niece of Solomon and self-proclaimed “art-dependent”; other key works from the collections of artist Katherine S. Dreier and Hilla Rebay, both central figures in the promotion of modern art in America. The main elements of each of these collections emerge clearly in the “Visionaries” exhibition, creating the narrative plot that charts the avant-garde innovations of the late 1800s and early 1900s.

“Visionaries” provides visitors a rare glimpse into collections of prominent artists who are part of the museum's heritage, such as Kandinsky and Klee, through a multiplicity of works that reflect the common interest of the six patrons who collected the works. The exhibition includes roughly 25 works from the Peggy Guggenheim Collection, which are rarely shown outside the palazzo in Venice, including paintings by Max Ernst, René Magritte and Yves Tanguy, as well as sculptures by Joseph Cornell and Alberto Giacometti. In the same group, you can also admire “Alchemy” by Jackson Pollock (1947), considered one of his most significant paintings and a famous icon of post-war abstract art, exhibited in the United States for the first time in 50 years. In the Thannhauser Gallery, which generally houses the earliest masterpieces to be included in the Guggenheim collection, you will appreciate over 12 works on paper by Picasso and Van Gogh, rarely exhibited to the public. In addition, sculptures by Edgar Degas and paintings by Pierre-Auguste Renoir, Paul Gauguin and Édouard Manet will be exhibited along the ramps of stairs specifically for this exhibition. In May, the first group will be replaced by a new selection of works on paper by artists such as Klee, Picasso, Kurt Schwitters and Van Gogh.

Several restoration projects were launched during the organisation of this celebratory exhibition. “Red Lily Pads” (1956), a painted steel sculpture by Alexander Calder, over 5 m high and suspended above the fountain of the Rotunda, has been subject to careful restoration and research that has revealed its splendid surfaces and restored the correct balance of the sculpture itself, the beautiful surface and the correct equilibrium of the sculpture. “Woman in evening Dress” (1877–80) by Manet was studied by a group of curators, restorers and scientists who rebuilt the story by examining the faded, resin-based varnish and the layers. The removal of the coating, which required a complex treatment, revealed a range of cold colours, a full-bodied brush and the refined details of Manet’s underlying sketch. Moreover, the works of Josef Albers, Kandinsky and Mondrian, among others, have received some treatment in preparation for the exhibition.

Furthermore, in parallel with the “Visionaries” exhibition, the Guggenheim’s Sackler Centre for Arts Education will host “Exploring 'Alchemy': Jackson Pollock.” This educational exhibition was organised by Carol Stringari, Deputy Director and Chief Conservator at the Solomon R. Guggenheim Foundation and Susan Davidson, Senior Curator, Collections and Exhibitions at the Solomon R. Guggenheim Museum, and presents an in-depth analysis of Pollock’s materials and creative process. Visitors will enter the world of the scientist and restorer to follow the investigative process and the treatment of the complex surface of ‘Alchemy’.

During the period of the exhibition, a large digital archive will be available on the website  guggenheim.org/visionaries, with extensive information and content regarding each of the six collectors, along with historical photographs and videos.

A fully illustrated catalogue accompanies “Visionaries” and includes an introductory essay by Megan Fontanella on the confluence that binds the six patrons of the museum and the strategies that characterise the collection. Some monographic essays by other Guggenheim curators highlight the main works in the Foundation's collection. Educational activities include tours, music programmes, films and a training guide for school teachers.

This exhibition was made possible thanks to the contribution of Lavazza. A valuable contribution was also given by the Bank of America. Heartfelt recognition for the support offered also goes to the Leadership Committee of Visionaries: Creating a Modern Guggenheim. Special thanks go to the members of the Board of Trustees - Denise Saul and John Wilmerding, Bill and Donna Acquavella, Rowland Weinstein, Arnhold Foundation, Peter B. B. Brandt, Dorothy and Sidney Kohl, Mnuchin Gallery, Lyn M. Ross, Elliot and Nancy Wolk.

Founded in 1937, the Solomon R. Guggenheim Foundation is dedicated to promoting the understanding and appreciation of art - with an emphasis on modern and contemporary art - through exhibitions, training programmes, research initiatives and publications. The Guggenheim network was started in the 1970s, when the Peggy Guggenheim Collection in Venice was added to the Solomon R. Guggenheim Museum in New York, and further expanded with the addition of the Guggenheim Museum Bilbao (opened in 1997) and the Guggenheim Abu Dhabi (currently under construction). The Guggenheim Foundation has always looked to the future and continues to forge international collaborations that celebrate contemporary art, architecture and design outside the museum. The Foundation also undertakes to support research, exhibitions and collections in the field of global art through programmes such as “Asian Art Initiative” (started in 2006), “Guggenheim UBS MAP Global Art Initiative” (launched in 2013) and “The Robert H. N. Ho Family Foundation Chinese Art Initiative” (created in 2013). For more information on the Foundation, please visit the guggenheim.org website. 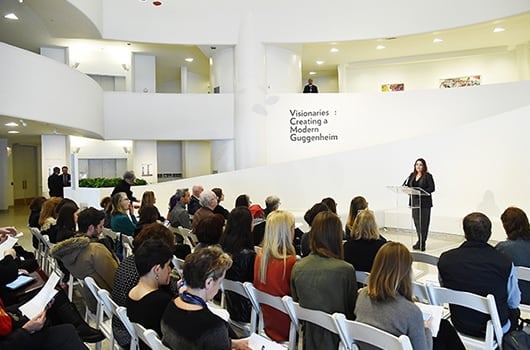 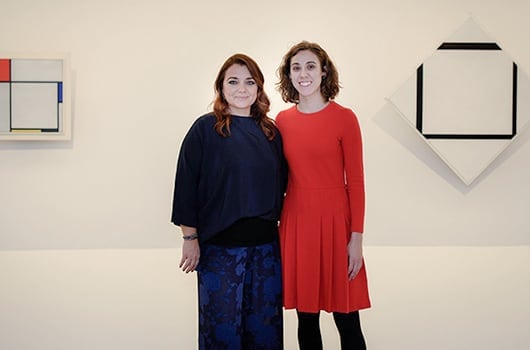 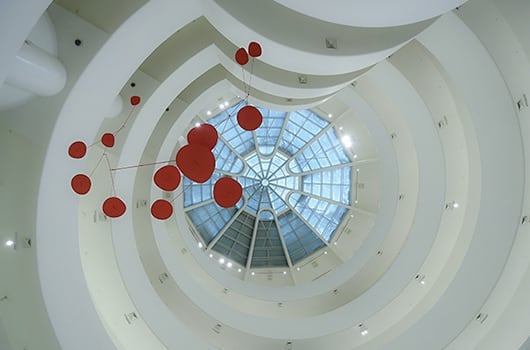 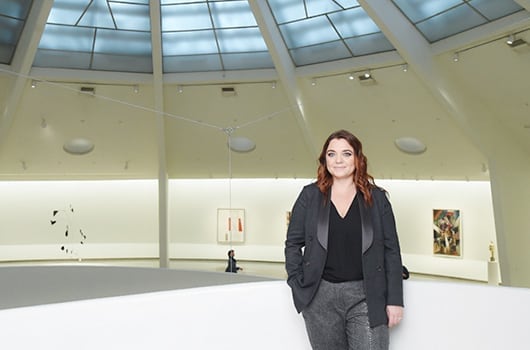 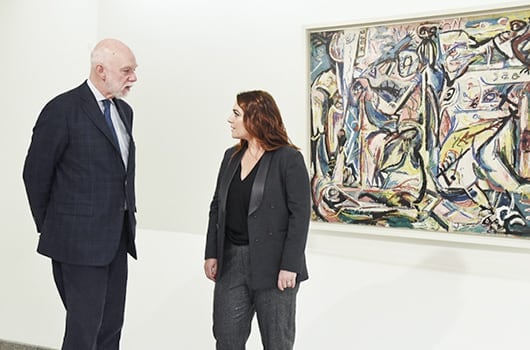 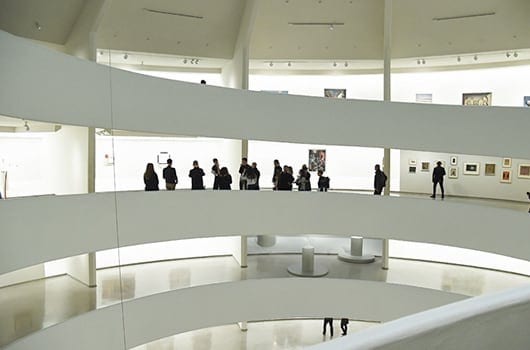 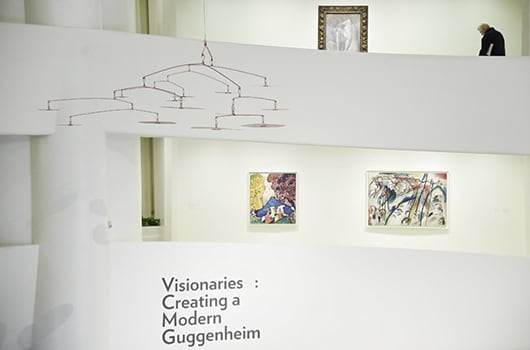 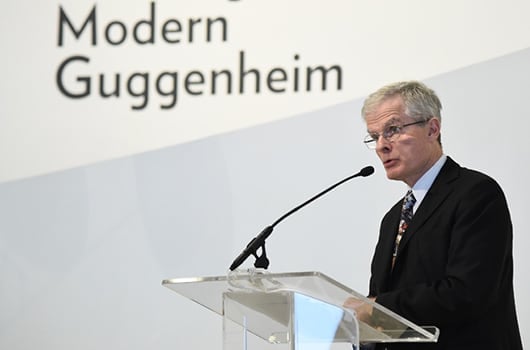 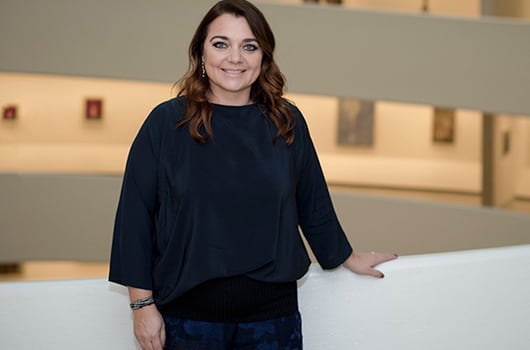